Once again this year, Projekt Management Austria, Austria's largest project management association, honored successful projects and project managers. Due to Corona, the presentation of the pma awards took place on a virtual stage.

Vienna, November 26th 2020 - Who are Austria's most successful project managers? What distinguishes excellent project management? And what about the next generation in the branch? "One time a year, we bring the stars of the project managment industry on the stage and give them recognition and applause," says Brigitte Schaden, president of Projekt Management Austria, Austria's largest PM association and certification body for project managers.

The pma awards are presented in four categories: project manager of the year, pma award for project excellence, project owner of the year and pma junior awards for pupils and students. And here are the award winners for 2020:

New base for the ÖAMTC air rescue service

Jennifer Eisinger is project manager of the year. She received this award for the construction of a new ÖAMTC air rescue base in Upper Styria. The senior project manager was responsible for the extensive project handling around Christophorus 17 in St. Michael. This included construction coordination as well as the implementation of numerous national and international specifications and guidelines. "It was a particular challenge to coordinate the final work during the lockdown and to commission the base on schedule with May 2020," says Jennifer Eisinger.

The Vienna City Marathon team around Wolfgang Konrad and Gerhard Wehr won the pma award for project excellence. The "INEOS 1:59 Challenge" was a meticulously planned project with the goal of running a marathon in under two hours. The historic sports event took place in Vienna on October 12th 2019 and was conducted especially for Olympic marathon champion Eliud Kipchoge. He became the first person to run the marathon distance in a record time of 1:59:40.2 hours. "More than 500 people were involved in this project," Konrad said. "From performance experts, meteorologists, top athletes to film crews, as part of an international team, we had to bring them all together in the best possible way on one day." Television stations from more than 30 countries broadcast the event live, reaching two billion people.

Headlights for the automotive industry

project owner of the year is Stefan Hauptmann, Vice President and General Plant Manager of ZKW Lichtsysteme GmbH from Lower Austria, for the "Porsche Taycan main headlights" project, a lighting system that ensures greater safety in road traffic. "Only with structured project management is it possible to successfully develop our complex products in the automotive industry," says Stefan Hauptmann.

Students of FH JOANNEUM Graz are the team that finished on seconed place in the category pma junior award (there is no winner this year). With their project "Design-Build-Fly 2020" they developed an aircraft and organized an air show where teams from Austria and Germany competed against each other.

Project management as a success factor

"Whether it's an infrastructure project, a sports event or product development - project management know-how is crucial for the success of these projects.  This is impressively demonstrated by the winners of the pma awards 2020," concluded pma President Brigitte Schaden. 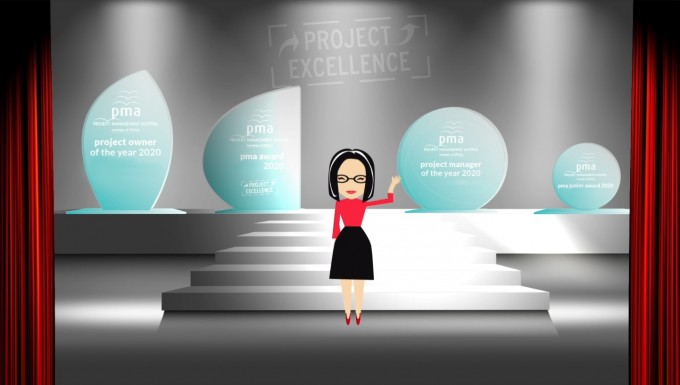 This website contains cookies - further information you can find in out data protection decleration. With the usage of our services you permit us to use cookies.
Accept decline
Read more